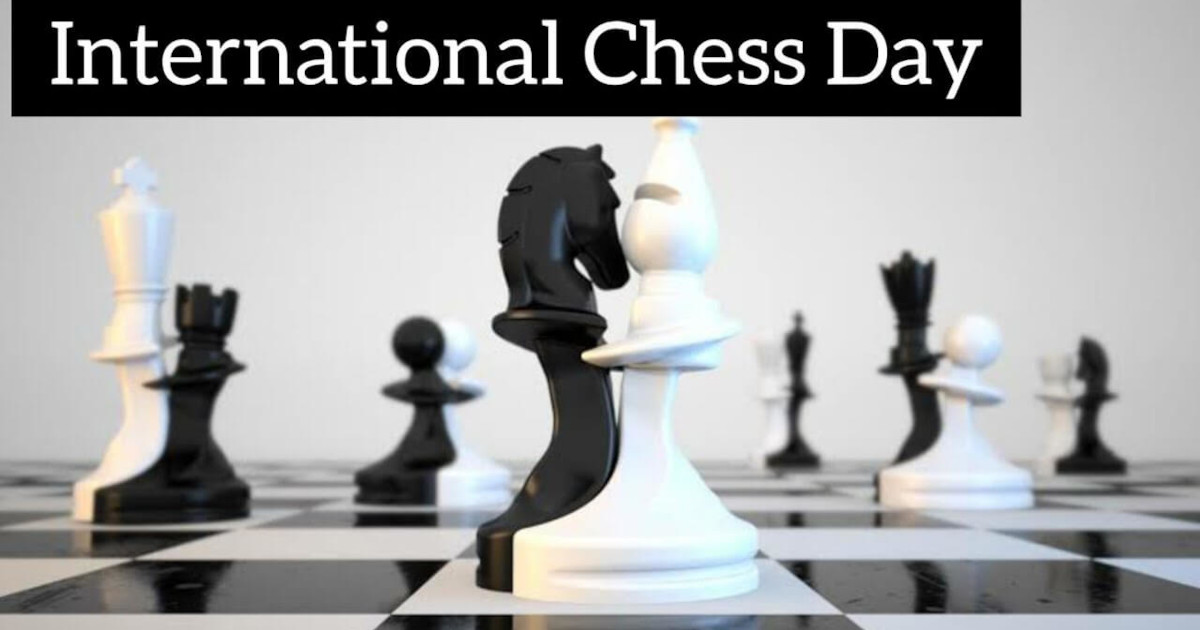 Chess is often called the “game of kings.” But on International Chess Day, it’s the game for everyone. On this day, the 20th of July, chess players around the world come together to celebrate this ancient and complex board game.

Whether you’re a seasoned pro or just picking up the pieces for the first time, there’s something special about spending a day playing chess. So dust off your board and get ready to celebrate!

Games and sports have historically aided humans in surviving difficult times by lowering anxiety and enhancing mental health. Chess has shown incredible durability, adaptation, and very powerful convening power in times of PANDEMIC, while the coronavirus breakout has pushed most gaming and sports activities to scale back.

Chess has experienced tremendous development since the COVID-19 epidemic broke out, with more players than ever getting together to take part in tournaments that are frequently organized online.

There was no national chess day before 1966. Chess day did not start until the World Chess Federation, FIDE (Fédération Internationale des Échecs), was established. On July 20, people all over the world celebrate Chess Day, which honors one of the most well-liked board games that have, for decades, brought people of various ages, genders, and societies together. Discover more about this unique day and how to celebrate by reading on.

Chess is one of the oldest games that humans have ever played; it has a roughly 2,500-year history. Chess is thought to have originated from the ancient Indian strategy game chaturanga, which is also thought to be the common ancestor of several other board games, such as sittuyin (Myanmar), xiangqi (China), shogi (Japan), and makruk (Thailand). From India, chaturanga traveled to Persia, where it was renamed shatranj, and finally to the Muslim world. From around the ninth century, the game made its way to Europe. The 15th century saw the introduction and adoption of the modern chess rules, which swiftly expanded throughout western Europe. The first articles on chess strategy theory were also published at roughly the same time.

Chess is one of the most played board games worldwide right now. Over 600 million regular chess players exist worldwide, and approximately 70% of adults have played the game at some point in their lives, according to FIDE. One of the best things about chess is that everyone can play it, regardless of their age, gender, language, social status, or physical ability. Chess is also more accessible and affordable than most sports.

Chess combines aspects of the sport, rational thought, and art. It is a truly international game that promotes inclusiveness, fairness, and respect for one another. As a result, it can be used to foster a climate of acceptance and understanding across all peoples and nations.

Therefore, it is not strange that there is an international holiday that honors and develops the game of chess on a global scale. The first International Chess Day was observed in 1966 to mark the International Chess Federation’s (Fédération Internationale des Échecs, FIDE) founding year. The competitors in a chess match held during the 1924 Summer Olympic Games founded FIDE on July 20, 1924, in Paris. FIDE has 191 member federations as of 2019.

The United Nations General Assembly passed a resolution designating July 20 as World Chess Day in December 2019. It aims to draw attention to the crucial part that chess and, consequently, FIDE play in encouraging intercultural communication, cooperation, and a culture of peace and harmony.

Numerous offline and online competitions and events are held annually to commemorate and promote the International Day of Chess. The day’s theme the previous year was “Learn to play chess or teach someone else.” To commemorate the occasion, a number of organizations and non-chess players took the theme seriously and joined the ranks of new players. Although the subject for International Chess Day 2022 has not yet been revealed, given the success of 2021, it may follow a similar path. Here is how this day is being celebrated around the world;

The day is celebrated not only by playing or teaching chess, but also by participating in offline competitions, internet campaigns, and marathons. To honor World Chess Day in 2021, Chess.com organized a 24-hour marathon. The top five competitors in an arena tournament that lasted the entire day each got a free one-year membership to the well-known website.

People Play Chess Or Learn How To Play It

People can find a chess partner to play the game with as this might be the first thing they attempt. If they have never played before or it’s been a while, they may consider going out and picking up a new skill. Find a fight partner by asking a buddy to teach them or look up some instructions online.

Enrolling In A Chess Club.

Schools in middle and high grades, recreation centers close by, clubs for sports and online communities Chess clubs can be found all around the world. People find a chess club in their area by looking around the city or looking for one online. They Join, play (or learn to play) with new people, and perhaps even pick up a few new chess techniques in the process.

Please pardon the Harry Potter allusion, but feel free to express your inner Ron Weasley by manipulating your buddies like enormous chess pieces. People Plan a great weekend gathering and ask at least 32 people to participate. Having everyone wear black or white clothing with chess pieces on it would make it simple to recognize each person’s role.

Having A Movie Night With A Chess Theme

People bring their loved ones together for a movie night with a chess theme. They may decide to pick from “Searching for Bobby Fischer” (1993), “Queen of Katwe” (2016), or the most current Netflix series, “The Queen’s Gambit.”

Since primitive times, people have played this game, or at least some of its variations. It is one of the most sophisticated activities in the world since it blends athletics, strategy, scientific thinking, and aspects of art. One of the most mentally demanding, accessible, and reasonably priced sports in the world is chess.

Since it does not discriminate on the basis of age, caste, language, status, physical ability, or gender, it is a genuinely global game. It promotes rational thought, justice, and respect for one another among players. Additionally, it fosters tolerance among individuals and governments around the world.

People Interact With One Another Because Of Chess

People all across the world have played and still play chess. This game is open to players of all ages, genders, socioeconomic classes, and physical capabilities. Experts even think that playing chess can foster tolerance and cultural understanding between different nations and civilizations.

Chess has been uniting people for ages as one of the most played board games in the world. The majority of adults (almost 70 percent) have played chess at some point in their lives, according to a YouGov survey done in 2012. Moreover, chess is played routinely by more than 600 million individuals worldwide. The purpose of Chess Day is to recognize these facets of the straightforward game of chess. Additionally, it is to spread awareness of the game so that others who have never played can see its advantages and enjoy a friendly game.

Chess Is Healthy For People

Our brain cells benefit much from the game of strategy. Chess is prescribed by doctors to treat Alzheimer’s disease and by psychologists to enhance memory. Chess has been incorporated into school curricula in a number of nations due to its good impacts on young children, including its ability to improve grades and encourage social manners.

Chess is excellent for the brain in addition to being healthy. Chess is frequently suggested by psychologists as a way to enhance memory and fend off the beginning of Alzheimer’s. It is equally important to highlight how chess affects young minds. It has been demonstrated that the game enhances general grades and social behavior.

What To Give On International Chess Day

You can invite your friends and family at least 32 of them over for a picnic and consider setting up a game of human chess in the park for an enjoyable Saturday or Sunday activity. You can use colorful t-shirts with the names of the game pieces printed on them to distinguish who is playing and to identify yourselves.

On International Chess Day, people enjoy any chess-related activities they choose, whether it be learning about the game, playing a game, or simply watching others play in person or online. This day undoubtedly honors chess’ lengthy history and social contributions. Class, linguistic, and cultural boundaries have all been broken by chess. It is just two people sitting down to play one of the world’s most cognitively taxing games. Today, there are chess clubs in practically every city to promote the game, its followers, and its lovers.